FROM LIFECANADA: ​
Last year marked the 50th anniversary of the 1969 decision that made abortion legal. LifeCanada felt that this tragic milestone could not pass by without being marked in somesignificant way.
LifeCanada along with We Need a Law and several of our member groups came together to produce 50 video testimonials of people who had experienced abortion in some way.
Some talked of their regret, some spoke of the near miss and the gratitude of not having gone through with ending the life of their child.
Others spoke of placing their babies for adoption, and others still talked of the undue pressure they faced from medical professionals who wanted them to "terminate."
These testimonials were released each day from Mother's Day to Canada Day.
And we ended our campaign with a full length documentary.
The documentary was screened at our National Conference, with great reviews.
We now have the great privilege of releasing the documentary to you, free of charge and available here on The Missing Project web-site. The Documentary is also available with French sub-titles.
If you are home bound (and you should be), we recommend taking some time to watch this film that chronicles the history of abortion in Canada, the reaction of people of conviction who tried to stem the tide, and the current-day warriors who continue the fight to save the lives of our littlest Canadians and their mothers and fathers from the tragedy of that decision, made 51 years ago.
THE MISSING PROJECT 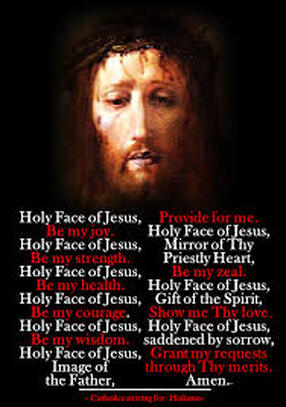 Through the Sorrowful and Immaculate Heart of Mary, I (we) offer you these prayers in reparation for the sins which offend God the most in these modern times - the sins of blasphemy and the profanation of Sunday and Your Holy Days of Obligation.
Prayer to offer the Holy Face of Jesus to God the Father to appease his justice and draw down mercy upon us Almighty and Eternal Father, since it has pleased Our Divine Saviour to reveal to mankind in modern times the power residing in His Holy Face, we now avail ourselves
of this treasure in our great need.
Since our Savior Himself promised that by offering to you His Holy face disfigured in the
passion we can procure the settlement of all the affairs of our household, and that nothing whatsoever will be refused to us, we now come before Your throne.
Eternal Father, turn away Your angry gaze from our guilty people whose face has become unsightly in your eyes. Look instead upon the Face of Your Beloved Son; for this is the Face of Him in whom you are well pleased. We now offer You His Holy face covered with blood, sweat, dust, spittle and shame, in reparation for the worst crimes of our age, which are atheism, blasphemy, Abortion, Euthanasia, and the desecration of Your holy days.
We thus hope to appease Your anger justly provoked against us. The All-Merciful
Advocate opens His mouth to plead our cause; listen to His cries, behold His tears, O
God, and through the merits of His Holy Face, hearken to Him when he intercedes for
us poor miserable sinners.  Amen.